Non-alcoholic is all the rage

Last spring, we predicted the fact that non-alcoholic beverages would become increasingly popular. Our prediction came true and then some! Even Heineken produces a 0% variety these days..

Non-alcohol and low-alcohol beer consumption went up by 25% in the first half of the year here in the Netherlands, and by 38% in Belgium. Although the total volumes are still tiny when compared to the sales figures for regular alcoholic beer, a market shift is undeniably taking place. The quality of non-alcoholic wines lags far behind that of non-alcoholic beer, which also contributes to the increase in 0% beer consumption. 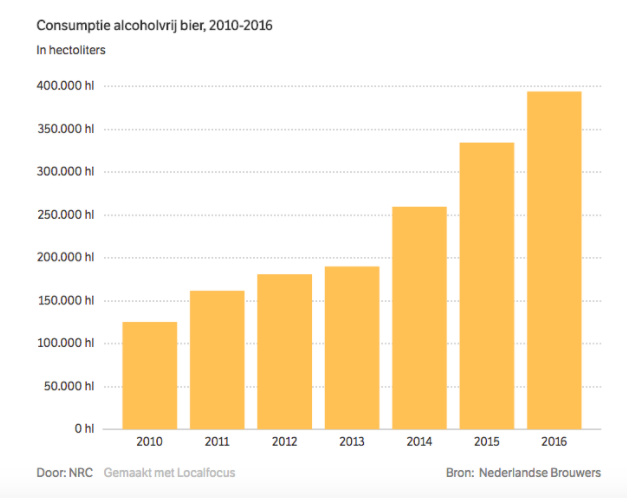 How does Youp feel?

In the 1989 annual New Year’s Eve conference, Dutch comedian Youp van ‘t Hek managed to paint Heineken’s then attempt at a non-alcoholic beer in such a dull, dour fashion, that they were forced to halt production of it four years later.

Bavaria was the first to try again, many years later in 2009. Many retailers, fellow beer brands, and even company employees considered it to be a foolish move. However, all of them were soon proved wrong. Even so, it took a while for competitors to find the courage to take the plunge as well. Grolsch recently replaced its Stender variety with a 0% beer, and Heineken 0.0 has only been available for a few months now – with Youp’s blessing this time around.

Things that were considered ‘not done’ mere 30 years ago are commonplace nowadays – in fact, many of us are so health-conscious these days that the Dutch Health Council is projecting that beer will soon follow in smoking’s footstep and become the new taboo.

’People are becoming more and more aware of their food and drink and looking for healthier alternatives these days,’ says Melvin de Lange, operational manager with DeFabrique. “Even those of us who do not want to give up drinking tend to prefer craft beers like IPA or Trappist.”

Non-alcoholic beer not only lacks the negative impact on your judgement, it also has only half as many calories as regular beer or cola. Barring Radler; due to the added lemonade, Radler beers are just as caloric as regular beer or soft drinks.

In any case, beer without alcohol – also known as 0.0 or 0% beer – is becoming increasingly popular. Such an advance usually does not happen without any incentive, and the same applies here; the various breweries have invested heavily in non-alcoholic beer over the years.

Secondly, the market for non-alcoholic varieties is much bigger! These varieties are suitable for everyone, but the beer brands are marketing them mostly towards pregnant women, athletes, and designated drivers on nights out. Another new target audience to be mined are Muslims, whose religion prohibits them from drinking alcohol. For example, market research by Euromonitor indicates that non-alcoholic beer is very popular in Saudi-Arabia.

And last but not least, any manufacturer of any kind of product would resent having to tell customers to use their product only in moderation. With non-alcoholic varieties, there is no need for such cautioning! Non-alcoholic beer represents a way for breweries to show that they take their societal responsibilities seriously.

Taste is what matters most

In spite of the many marketing efforts, non-alcoholic beer would never have risen to prominence if companies had not invested heavily in the flavour. “The previous generation of non-alcoholic beers was rather sweet, but these days, 0% varieties increasingly taste just like regular beer,”says Melvin. “We carry non-alcoholic Radler and the White version of Wieckse and Bavaria, as well as Bavaria 0.0 and non-alcoholic Warsteiner. On top of that, we offer all sorts of alternatives to beer, such as flavoured water, lemonades, fresh juices, and coke from the Roze Bunker.”

DeFabrique has since taken the next step in achieving a healthier lifestyle. Melvin explains: “After alcohol, sugar is the worst thing for your health, which is why we introduced our flavoured water bar earlier this year. Flavoured waters are just as tasty as soft drinks, and much healthier! Moreover, we will soon be expanding on our existing range again with a really cool, healthy Do-It-Yourself concept that revolves around water. To be continued!”