Xander Kranenburg: ‘I gave myself and my family a great gift: time.’

Creativity cannot occur unless you go offline: no Internet, no phone, no appointments. As such, DeFabrique has created a Space for Space where guests/visitors/speakers can go offline for a bit. To get inspiration, we asked a number of event professionals how they go offline and find inspiration. This time around, we talked to award-winning producer Xander Kranenburg.

‘My daughter Elyse was born at 12:30pm. Less than four hours later, I was on my way to the Huis ter Duyn estate to make sure everything was set for an award show. How crazy can you get?’ That is what he asked himself six months later, when he decided to give himself and his family a great gift: time.

‘I realised that I had a choice. Everyone has the same amount of time, but everyone utilizes it differently. So the real question is, how do you utilise that valuable time?’

The words of designer Stefan Sagmeister about the impact of free time stayed with him. Sagmeister closes his office once every seven years for the duration of one year, to find new inspiration. ‘How does he do it, I wondered, and then I realised there was only one way to find out: by doing it.’

‘If you just keep going, everything seems okay. That is, until you have a moment of rest; that’s when the panic hits.’ He spent a whole year preparing. ‘First, I told the staff, then my suppliers, and then finally, I released my clients. It was madness! It did make me realise that clients are just as dependent on their providers as we are on them. All of a sudden, my clients had to go and find a new agency that could organise their next event as successfully as the previous one.’

On January 1st, 2014, he closed the office and experienced the quiet for the first time. ‘What have I done, I thought. That’s the way it goes; if you just keep going, everything seems okay. That is, until you have a moment of rest; that’s when the panic hits.’

During his year off, Xander drank a lot of cups of long-promised coffee with a lot of acquaintances, spent a great deal of time with his family, and went on a three-week cycling trip through the Scottish Highlands with his father. ‘There are so many people out there who dream about doing things, but then never do. This was that kind of thing for me. There’s no more to it than just scheduling a date in your planner, but somehow, dreams like these tend not to become reality, simply because people do not allow themselves the time off.’

Xander’s decision wasn’t understood by everyone. ‘People always want more, better, bigger, more expensive, and they influence one another so much in these things. Why would you want to pull the plug on a successful business, they wonder.’ During his sabbatical, Xander receives a book by Karl Pillemer, ’30 Lessons for Living’. This researcher interviews over one thousand old people and among other things, asked them their one regret. Ninety percent of people said they regretted working too much. ’90 percent!’ Xander exclaims. ‘That’s not right!’

‘People always want more, better, bigger, more expensive, and they influence one another so much in these things.’

Xander is familiar with this drive to work. ‘Putting in your all is just human nature, I think, but when you run an agency, you are sometimes forced to accept projects that are not suited to you, or that you simply do not enjoy. After all, your overhead bills keep coming in, and you cannot afford to be choosy. Now that I am a freelancer, it is much easier for me to say no and only do the things that really get me going. As a result, I now have a lot of valuable free time with my family, and I am able to truly pay attention to the two or three large projects I do accept each year.’ 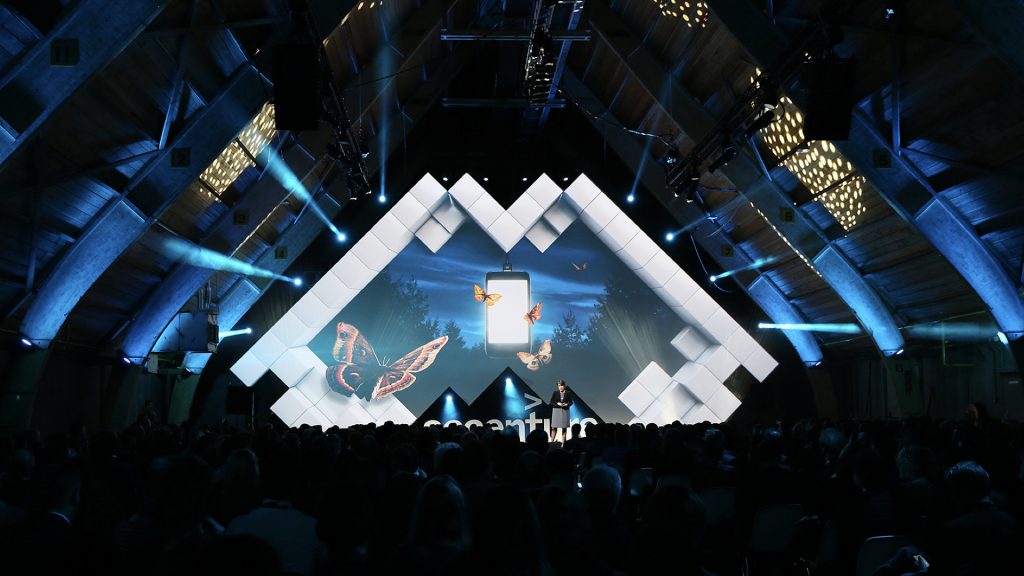 2014: 3D presentation during Accenture Innovation Awards at the Copra Warehouse

Curiosity as the driving force

According to Xander, curiosity is the ultimate driving force. ‘It ensures that you want to keep learning, like the best sushi chef in the world in the documentary Jiro Dreams of Sushi. When I first started out in this industry fifteen years ago, I knew nothing. I studied psychology at Leiden University, so I knew nothing about events. Production, audiovisual technology, décor and design were all completely foreign to me, but I started asking questions and learned how everything works, step by step. I am still not a lighting expert by any means, but I do speak the language, making it easier for me to communicate with the people who specialise in lighting.’

This same method features in the best-selling book The 4-hour Chef by Timothy Ferris. ‘He argues that you can easily become part of the top 10 of any occupation if you just ask yourself what you want to learn and who the best teacher for those things is. And if you do not become as good as you had hoped you would, hopefully, you can fall back on a second skill, namely perseverance.’

‘I myself went so far as to eliminate the biggest disrupters in my life a few years ago, namely Facebook, Twitter, LinkedIn… In fact, I don’t even own a TV nowadays.’

‘I alone am now worth five men, partially due to my experience, but also due to the digital tools that I use. Things like Slack, Wunderlist, and clever Keynote use allow me to save immense amounts of time. I do not understand why many big companies have not yet integrated apps and software like these into their daily operations. Why would you not want to work more efficiently, and moreover, more effectively? I myself went so far as to eliminate the biggest disrupters in my life a few years ago, namely Facebook, Twitter, LinkedIn… In fact, I don’t even own a TV nowadays. Instead, I take a very target approach to finding my information and recreation. YouTube, podcasts and Netflix go a long way.’

While Xander’s best ideas pop up while he is taking his morning shower, he finds inspiration for new concepts everywhere. ‘Essentially, inspiration is all around us, ready for the taking. A walk through an unfamiliar city, an animated conversation, or the show Twin Peaks by David Lynch, which you have been looking forward to for twenty-five years now. I make a point of not looking at other B2B events; instead, I look at cultural events. For example, the Dutch National Ballet’s productions are magnificent, theatre company Vis à Vis always has one surprise or another up their sleeve, and festivals such as Mysteryland, Defqon and Lowlands are light years’ ahead of the corporate events industry.’ 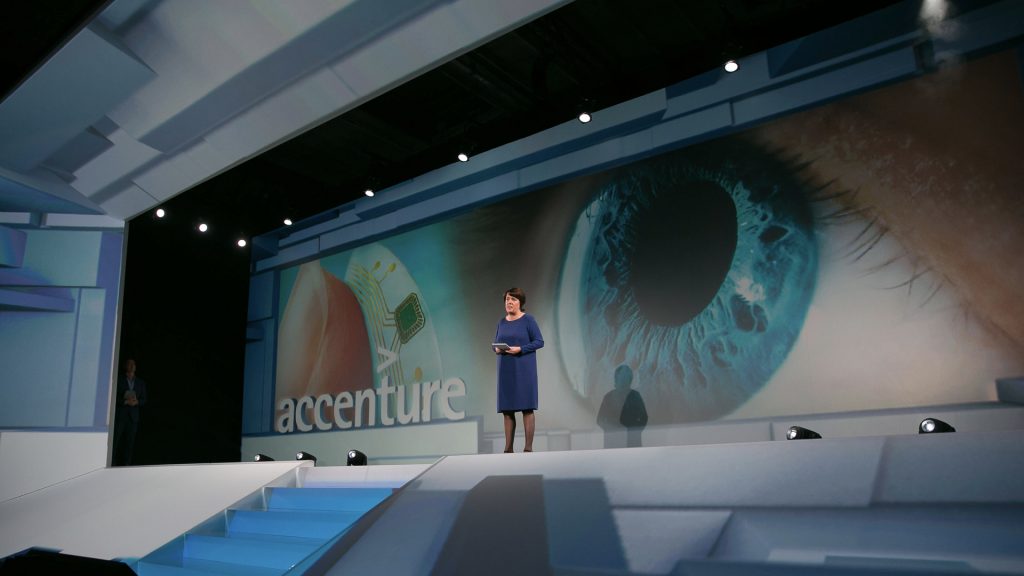 2015: a 200-metre-wide projection steals the show at the Innovation Awards

‘I am often asked to come up with something innovative, but then when I present a concept that really pushes the boundaries, things end up getting diluted after all because there is a committee, steering group, or project team that does not dare to take risks. However, The Next Web frequently pushes the boundaries, ranging from shaving someone’s head on stage and a bullshit bingo featuring a real cow to having the keynote speaker dressed in a tuxedo wakeboard along the Amsterdam canals and releasing 25 kilos of confetti at a grand opening. These things result in beautiful and, most of all, memorable moments. Isn’t that what it is all about?’

Xander Kranenburg is an experienced event and communications professional. He won the ‘Best Conference’ award at the 2016 European Best Event Awards, and his Accenture Innovation Awards, produced by him, won the Golden Giraffe for ‘Best Event for Business Relations’ this year. He is married and has three daughters, aged 2, 4, and 6. In his free time, he loves to spend time in the garden and behind his ceramic BBQ. His advice: ‘Trust that things will turn out well, and they will!’ 2016: robot Pepper welcomes the guests at Accenture in front of an imposing LED screen